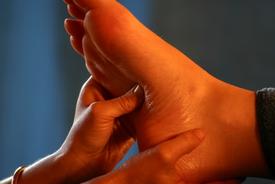 Acupoints used in treatment may or may not be in the same area of the body as the targeted symptom. The Traditional Chinese Medicine theory for the selection of such points and their effectiveness is that they work by stimulating the meridian system to bring about relief by rebalancing yin, yang and qi (also spelled "chi"). This theory is based on the paradigm of Traditional Chinese Medicine.

Many East Asian martial arts also make extensive study and use of acupressure for self-defense and health purposes (chin na, tui na). The points or combinations of points are said to be used to manipulate or incapacitate an opponent. Also, martial artists regularly massage their own acupressure points in routines to remove blockages from their own meridians, claiming to thereby enhance their circulation and flexibility and keeping the points "soft" or less vulnerable to an attack.